The Reviews on the Ranger are Here!

With the launch of the new 2019 Ford Ranger bringing the iconic truck back to North America's shores, the first looks, and reviews are starting to roll in, and the response? So far, so good with the reviews coming in, and the first hands-on experiences being unveiled to the public the overwhelming response has been, that this is the mid-size truck that you've been waiting for, but don't just take our word for it.

The 2019 Ranger, on sale early in the new year, will undoubtedly bring back a lot of the truck’s pride and glory without stealing too many sales from the F-150 — which, for a lot of people, is simply too much truck. - DEREK MCNAUGHTON | Driving.ca

My impression of Ranger, after a day behind the wheel on a variety of roads, highways and on a specially constructed off-road course, is positive.  The vehicle handled well, steered precisely, provided plenty of power and offered the comfort and safety features I expected in a vehicle... Doron Levin - Forbes.com

Built Ford Tough isn’t just a slogan. It’s an attitude that runs deep in the history of Ford truck engineering and has produced Canada’s popular lineup of rugged and dependable Ford pickups. That lineup is even more remarkable with the all-new 2019 Ford Ranger, tested under conditions more extreme than you would ever likely encounter. Go ahead and set a date for your next adventure.

Ford engineers set a grueling test regimen to prepare the new Ford Ranger for the demands of all-terrain travel. Durability trials on roads so punishing that robots were called in to do the driving. Days of constant shaking in the lab to help identify and eliminate squeaks and rattles and to tune suspension parts and body mounts for durability and performance. Towing heavy loads for hours up steep grades at 37.8° Celsius (100° Fahrenheit). Brutal traversing under heart-pounding, bone-jarring off-road conditions. The new Ford Ranger. It’s more than up to the challenge of taking on your toughest test. 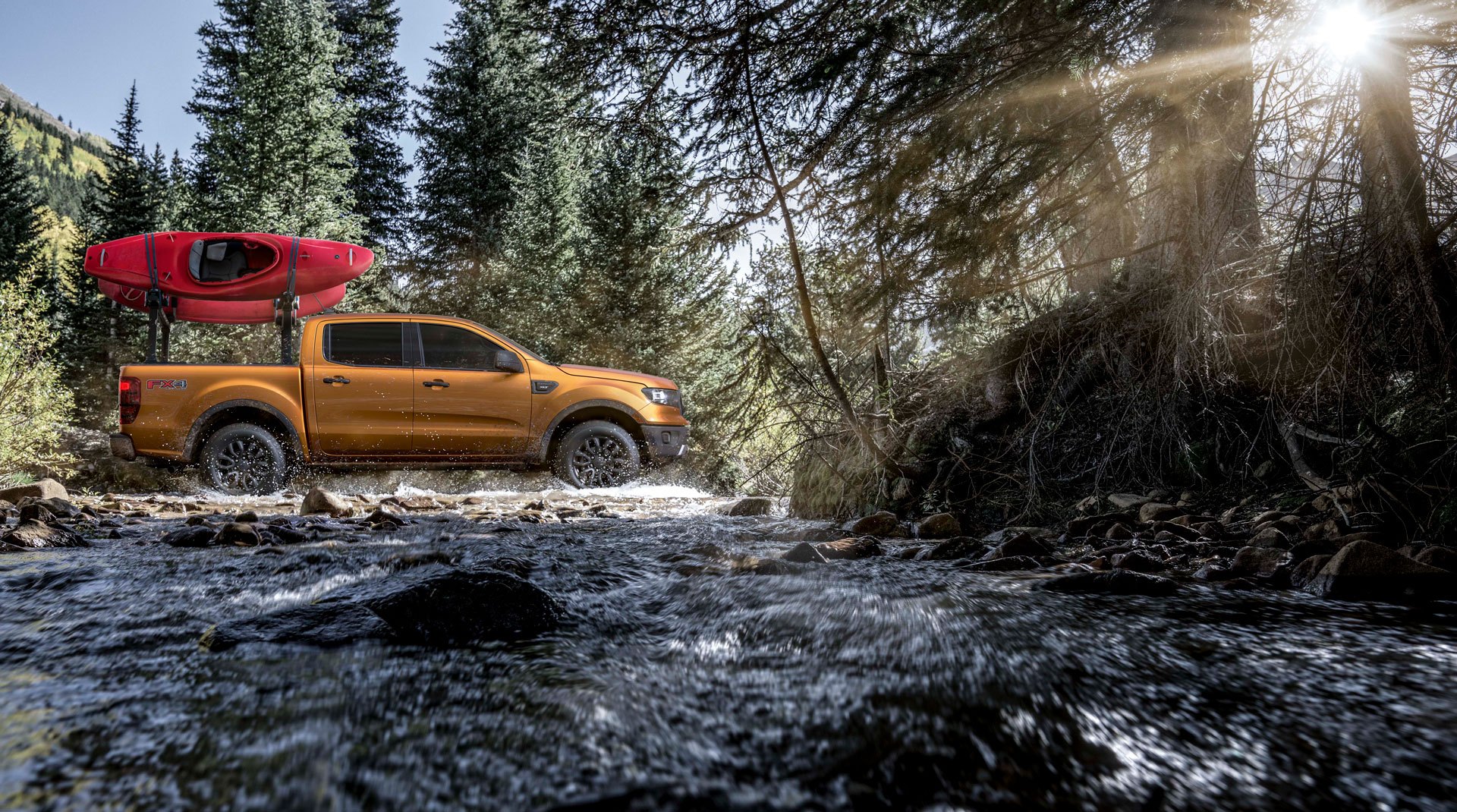 Raw torque rules when it comes down to taking on the rugged conditions you encounter off-road. The new Ford Ranger beats all other gas-powered pickups in its class with a torque rating of 310 lb.-ft.* The 270 horses under the hood are mighty impressive too. The 2.3L EcoBoost is engineered with a twin-scroll turbocharger that extracts exhaust gas from pairs of cylinders in alternating sequence, maximizing pulse energy to the turbine wheel for responsiveness on demand with virtually no lag. The 10-speed SelectShift automatic transmission, featuring Ford-patented technology, optimizes gear progressions and delivers smooth, quick shifting up and down the gearbox.

For all the power it generates, the 2.3L EcoBoost is highly fuel efficient,* courtesy of its direct-injection (DI) system. With DI, gas is injected at high pressure directly into the combustion chamber in a very precise measure. The engine also features Auto Start-Stop Technology. When you come to a stop, the engine shuts off to help reduce fuel consumption and restarts immediately when the brake is released. Designed smart for truck applications, auto start-stop deactivates in situations that demand instant responsiveness, such as when you’re towing a trailer or running in four-wheel drive.

*Class is Midsize Pickups based on Ford segmentation.

**When properly equipped with the trailer tow package and a trailer brake controller. The class is Midsize Pickups based on Ford segmentation.

The foundation of outstanding off-road capability is the strength. That’s why Ford engineers made the backbone of the new Ranger a fully boxed, high-strength steel frame with six crossmembers — plus steel bumpers and tow hooks mounted directly to the frame for ruggedness and durability.

The new Ranger has a double A-arm independent front suspension engineered for agility and control over rugged off-road terrain. The shock absorbers are the monotube type designed for fade resistance and heat dissipation. They’re also nitrogen gas pressurized for shock-damping consistency over sustained rough road conditions. The rear suspension of the new Ranger delivers ride quality and control, both on and off the road. Which is why engineers chose two-stage parabolic leaf springs. Their flexible, low- friction design enables more axle movement and flexibility with reduced stiffness over the conventional multi-leaf springs typically used in high-load applications. They’re nitrogen gas pressured and designed for shock-damping consistency over sustained rough road conditions. 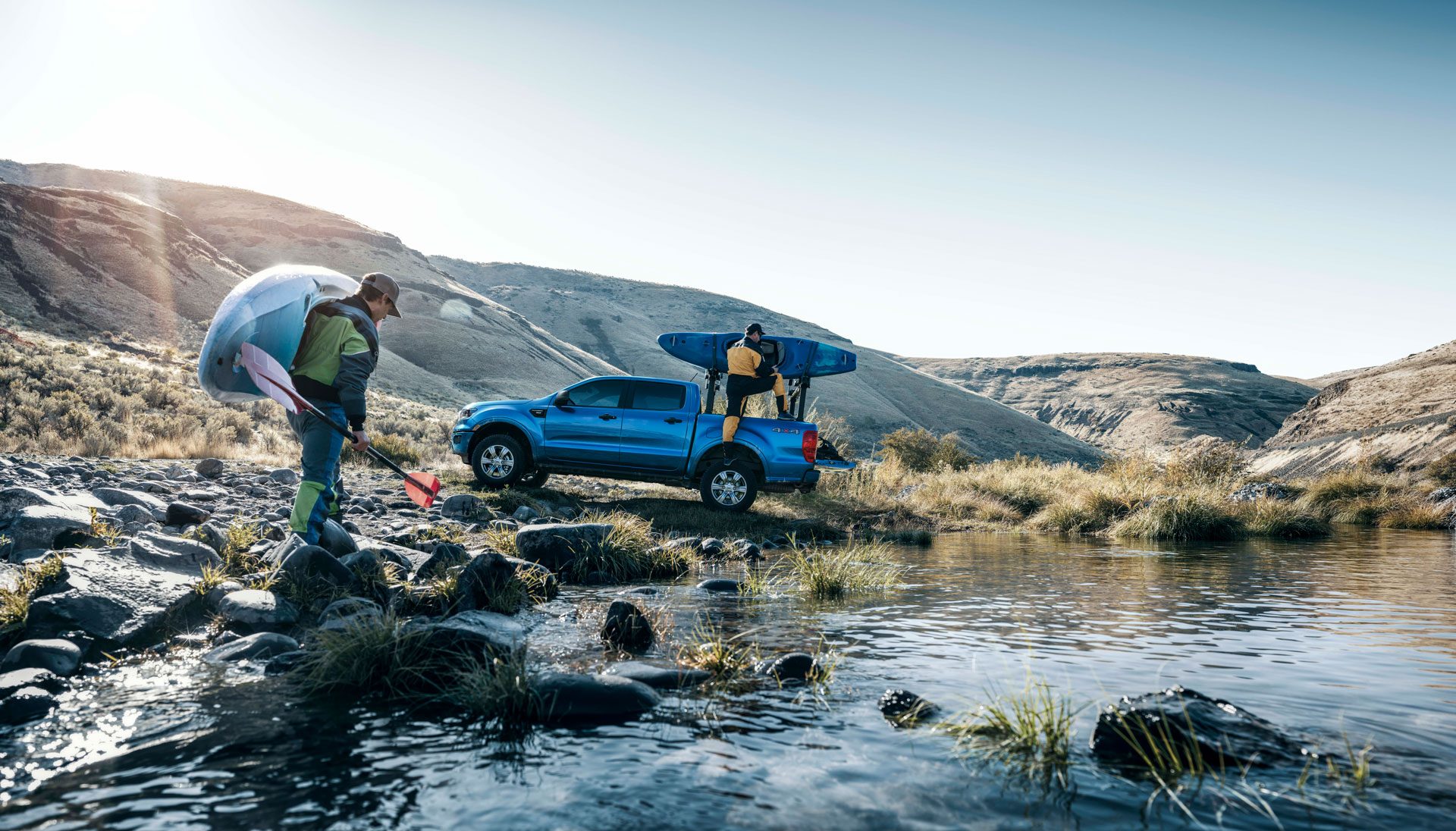 Ford Co-Pilot360™  — a suite of advanced driver-assist technologies* that can help you navigate our increasingly crowded roads and highways with greater confidence. Features included are BLIS  (Blind Spot Information System)  with coverage for both the truck and trailer, Lane-Keeping System, Pre-Collision Assist with Automatic Emergency Braking (AEB), Auto High-Beam Headlamps and a rearview camera.  Ford Co-Pilot360 comes standard on Ranger XLT and LARIAT and is optional on Ranger XL.

*Driver-assist features are supplemental and do not replace the driver’s attention, judgment and need to control the vehicle. Lane-Keeping System does not control steering.

Using Waze inside your Ford vehicle is now easier since the much-loved, crowd-sourced navigation and traffic app is now compatible with available SYNC 3  AppLink . By accessing Waze through SYNC 3 AppLink, you can collaborate with other users, outsmarting traffic by sharing information to get the best routes, and receive real-time alerts about accidents, road hazards and traffic jams. Moving Waze to the dash screen allows you to conveniently access the app’s features on a larger display. You can operate Waze through your vehicle’s touchscreen, as well as use voice commands for hands-free control, helping to keep your eyes on the road.  Available via iPhone in Ford vehicles equipped with SYNC 3 with software version 3.0. Waze is also available on Android Auto.

Want to be one of the first to own the 2019 Ranger in Canada? Just fill out the contact form below!